A typical weekday evening for first-jobber Thanakarn is spent in one of central Bangkok’s many shopping malls and high-end bars or restaurants that line Sukhumvit Road, a main thoroughfare.

The 24-year-old, who only wanted to be known by her first name, goes out with friends or co-workers three to four times a week. She may spend around 1,000 baht (30 US dollars) each time, which over a month adds up to more than half her salary over the same period.

She routinely looks for new places to go and new things to buy through her social media accounts and websites that she monitors on her phone throughout the day.

Although she works for a multinational company and earns an above-average salary, she does not have any savings and is in credit card debt for her new phone and a recent trip to Japan.

“I spent a lot of money this past month and I don’t have any left,” she says. “I’m borrowing my friend’s money to get me through the end of the month till I get my salary.”

Consumers like Thanakarn have contributed to a ballooning of household debt in Thailand, which currently stands at around 10 trillion baht (29 billion dollars), or 85.9 percent of the country’s gross domestic product (GDP).

The amount of household debt – measured as all the money owed to financial institutions by adults in a household – has jumped by around 40 percent in the last six years, according to the Bank of Thailand.

If unofficial loans from loan sharks, which are common in Thailand, are taken into account, the debt is estimated to be even larger than the country’s GDP, confirming Thais as some of the most indebted people in the region.

“High consumer debts could eventually slow down economic growth,” warns Vikas Kawatra of SCB Securities. “Because at the end of the day, it is the consumers that drive the economy.”

The ratio of Thailand’s household debt to income has increased as well, growing from 93 percent of annual income in 2007 to 121 percent in 2014, according to a report by consultant firm McKinsey Global Institute.

People spend more time and money at shopping malls, buy more expensive cars, travel abroad more, and own and use credit cards more, according to Kreingkrai. 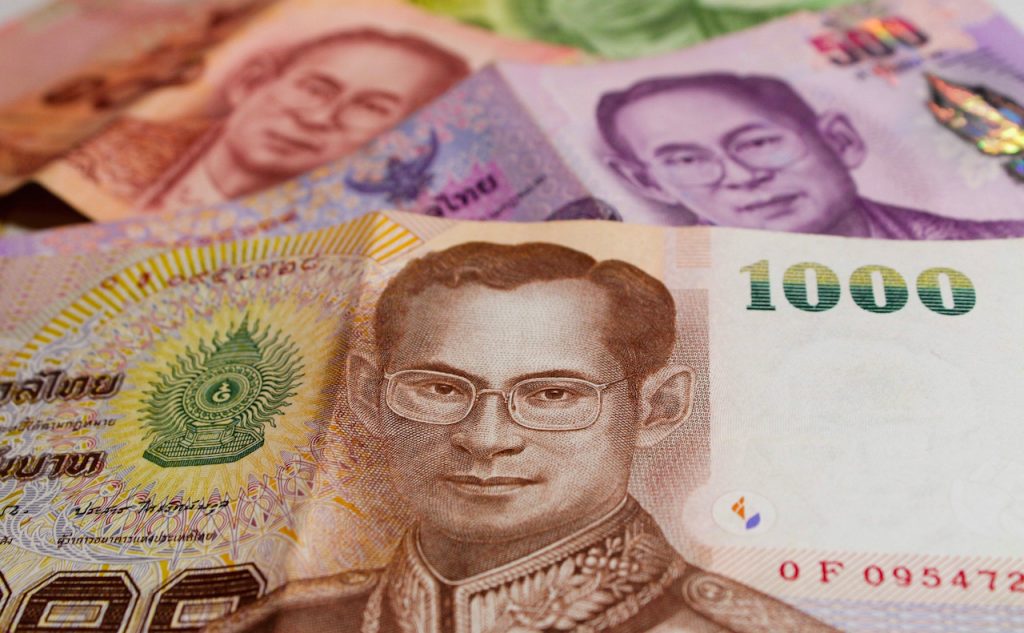 The number of credit cards in Thailand rose from 13.4 million in 2010 to 20.5 million this year, according to the data from the central bank.

Shopping mall operators have greatly expanded their operations in the capital as well as in regional cities over the past few years. They reported growth in revenue and in the number of customers last year and forecast that trend to continue.

Luxury car sales at this year auto show in Bangkok have also increased from the previous year, while the economy car sales have fallen.

A growing taste for Western-style food and drink, such as wine, has also contributed to an increase in everyday spending, according to market intelligence firm Euromonitor.

Thais’ heavy use of social media “is one of the key reasons that drives consumerism,” Kreingkrai says. “People emulate what they see others do online.”

An average Thai spends an estimated 6.6 hours per day on the internet, while the amount of individual user activity on Facebook is much higher than the global average.

Bangkok’s luxury mall Siam Paragon and Suvarnabhumi Airport have for several years topped the list of the world’s most geotagged locations on Instagram, a mobile photo-and-video-sharing application.

“Being in debt is using money from the future,” Vikas says. “Problems arise when the future expectation do not match the reality of the economy.”

Economic growth has been far from stable in the last five years, with fluctuations partly due to political volatility, and no strong recovery in sight.

Growth estimates for 2015 were cut from 3.5-4.5 percent to 3-4 percent due to weakening exports and falling domestic demand, according to the Office of the National Economic and Social Development Board.

The key tourism industry has also been affected by political events including street protests and the military coup last year.

Thailand’s household debt is expected to rise to 90 percent of the country’s GDP the end of this year, leaving many households vulnerable to economic changes.

“Household debt likely would not lead to the collapse like that of 1997,” says Vikas, who was among the few economists to predict the Asian financial crisis that year. “But the risks are now spread out among consumers.”

Thanakarn however displays little fear of the state of the economy and the risks.

“I know I should spend money wisely and think about saving,” she says. “But things I buy and places I go make me happy … Shouldn’t I do what makes me happy?”

A version of this article was published by dpa international on June 10, 2015 with the headline: Baht bill blues: Indebted Thais could worsen growth slump. The article appeared in various publications, including The Nation, Khaosod English, Gulf News and The New Age.